First of all, my apologies for so few updates on this website. I've been up to my neck with my day job, and spending most of my time living out of a suitcase. I don't have to tell you this isn't my idea of fun at all, or do I!? That said, in the short time that I had access to some solder fumes, I've revisited the non-os dac as I feel it's the current weak link in the system.

What do you do if you think your DAC is the weakest link? Build another DAC? Play around with the circuitry? Add a tube output stage? Or breakdown and plough big money for some commercial design? Fortunately or unfortunately, yours truly is also a cheapskate so the last option will always be the LAST option.

Of particular interest to me is choice number one and the TDA1541 naturally calls for attention. Also, I just heard a good implementation using the PCM63. A wonderful chip too! But the added complexity, power supply requirement and additional gain stage... make this more than a weekend affair. Yes, more stuffs to play but with so little time before I hit the road again, I'm better off with something easier...

Carsten from Germany pointed me to Doede Douma's excellent website, where he described in good detail his 8xTDA1543 non-os dac. Now Mr Douma even claims that this DAC sounds like SACD! Wait a minute, 8 pieces of dirt cheap DAC chips (hey! it rhymes) sound like SACD?! Woo hoo! This I got to try!

The circuit is so simple you can whip up in half an hour but as with all DIY projects, it's a good idea to factor in 3x that amount, for time wasted looking for parts, soldering/desoldring a wrong orientated part, shit-happenings, Murphy's Law... get the idea? And sorry, I'm not going to draw the schematic. It's so simple it's better to describe in words.


Mr Douma suggests a 2kohm pot for pin 7 but I can't find this at home so I salvaged a 10kohm pot and paralleled a 1kohm resistor. In the end, settled for about 150ohm on this pin. For I/V conversion, Mr Douma suggests 270ohm but I could only find 249ohm, so just use it. And that's all to it!

Tower of music! The I/V resistors are all mounted underneath for shorter signal path. The power supply comes in through those ferrite beads. Those components on the right were a failed attempt with the TDA1545 DAC. Will revisit this some day... Those on the left is the single chip TDA1543 DAC. 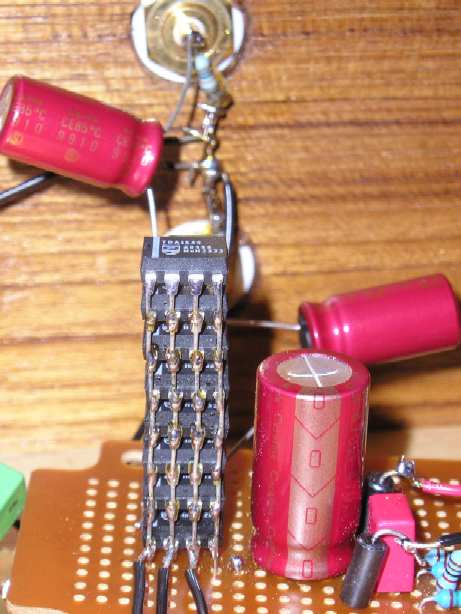 Though I took Mr Douma's advice to leave some air gap in between DAC chips, I didn't use a heatsink. Waily has built this DAC too and stressed the importance of keeping this DAC cool but I wanted to live on the edge! (Actually I'm lazy.) In this arrangement, I could only play for half an hour before the DAC starts to distort. Will HAVE to incorporate some form of cooling.

Okay, how does it sound? Way way better than the single chip version! I remember trying 4xTDA1543 a longgggg time ago and it didn't appeal to me, so much so that I simply prefered the single chip but this time, with so many changes to my system, 8x smokes! Forget about "one chip to rule them all", eight is the magic number here. And the strangest thing to me is that both Waily and I don't notice any lackings in the highs at all. This despite the sin(x)/x mumbo jumbo and abscence of the parallel resonant filter circuit so crucial for the single chip version. Huh? Maybe we need to dig out those dastard ear wax... Never mind. 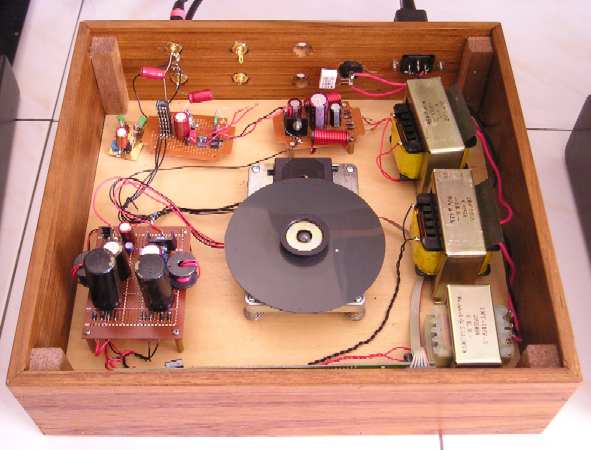 But improvement in sonics is a big leap. It simply sounds more fuller and more bodied. It images better too. Now Waily has found that choice of DC blocking cap to be very very critical to the final sound. We both like the Cerafines for a more natural/musical presentation but Waily has found the non-polarized Black Gates to be even better. I guess you know what I'll do one day... Here, read Waily's mail to me. His enthusiasm is infectious!

> Hi Yeo,
>
> Just some updates from me:-)...
> Tried out the dddac 1543, 8 pcs tda1543 piggyback cct.
> Switched on power and fine tune the Vref to 3.85V
> according to the site. Then MUSIC...
> Headroom:- Plenty of gain and it solves my needs of
> another gain stage:-).
> Smoothness,naturality:- Lost to single chip version,
> but it's dynamic and bit hi-fi sound:-(
> Distortion:-Wow, everything improves, the slight
> roughness of single dac gone completly, clarity and
> definition is another level that single dac can't
> attain.
> High frequency handling: This dac wins hands down and
> all those highs is MAGIC! guess what he mentioned that
> it is close to SACD is not unfounded, nevertheless I
> haven't really got the real chance to listen to SACD
> setup so I can't really compare, but the high is damn
> good!
> Low frequency handling:- It wins again and the bass is
> much tighter and register better.
> Mids:- Lose out to single dac as the voice is a bit
> thinner and not as sultry as before.
> Soundstaging and seperation:- It wins again against
> the single dac, now every instrument can be heard
> individually much cleaner and won't muddied up when
> singer voice is in even in complex passage.
> Soundstaging is wonderful, I am totally immersed in
> the music and much improves over the single dac.
>
> Summarised, it is a bit HI-FI sound but it clearly has
> more advantage over the single dac, except is does not
> feel very natural and smooth over the predessor.
>
> The dac's last only for 10 mins as overheating
> occurs:-(!!!, Found out that my regulator
> overheats(7808), quickly whip out DIY large heat sink
> over the regulator and problem is solved..(have to
> takecare the extra current of the 8 pcs tda1543). Also
> tried out the stacked dacs without cooling, no problem
> except realised that the Vref will drift once the
> temperature increase. Whipped out another tower with
> some stupid looking antenna like heat sink over the
> dacs, and it works better as the Vref will not drift
> much..Again these dacs really can cook HOT!!!
>
> After enough listening, still found that it lacks the
> smoothness, intimacy sound of single dac...!@#@#%#*
> looks like I have to do something, agak agak my
> coupling cap, the BG PK has something to do with it(no
> doubt I prefer BG in single dac, I guess a new
> matching caps has to be in in order to match
> perfectly).
>
> And in the cerafines, $#@*&!! ha ha now this dac is
> shinning!!At last, the smoothness is back plus all the
> plus point of the 8 dacs..Now it sounds not Hi-Fi
> anymore and I really have to let the single dac to
> go:-( as this dacs is way much better(IMHO and YMMV).
> It is very relax to listen to and it brings the music
> to another level that I may put a full stop to this
> dac selection/mods:-)
>
> No doubt the single dac is good! but this 8 dacs can
> proves it's authority and improvement over it.Guess
> what will happens with 16/32 dacs:-)..
>
> Going to try using SLA battery to drives the dac once
> I got it...Must really see why people keeps using
> battery as power supplies over the normal heavy
> regulated supply..
>
> Pics is attached..
> Yeo, try it and see how this dacs goes in your system,
> hopefully u will like it too..:-)..
>
> Regards,
> waily.

As you can see, all the credit goes to Mr. Douma and Waily for their excellent work! I'm just a "reporter" here. : )

Now Waily has moved on. He's now using batteries to power his DAC and absolutely love it! One day, one day...