Every once in a while, I get invited to visit diyer’s home and listen to their setup. Most of the time I politely decline as my tin ears just isn’t fit for such a task. You know, it’s like asking a blind man to commend on a Picasso. However, some setups are just too interesting to pass up.

There’s this diyer in the northern part of Kuala Lumpur who built himself a very interesting system. He uses some of our products but embellished with lots of his touches, like his build of various types of regulators, line conditioner, acoustic treatment etc. He even builds his own tonearm for heaven’s sake! So it’s quite an interesting setup.

But the most memorable of his setup, of which Gabriel (our resident speaker guru) and I recall most fondly, is his Coral 8A-40 in an angular spiral horn enclosure. In short, we have never heard the 8A-40 sound so good! This is a “vintage” type of sound, forgiving on most recordings but capable of various surprises as you put it to the paces. Very musical, non-fatiguing and you could really live with it.

Well, that was 2 years ago. So when this diyer invited us to his place again, we just got to go!

The setup has changed a lot, with the addition of super tweeters, subwoofer, more acoustic treatment etc. However this time he has a few gadgets that piqued our interest.

One of it is a so-called “noise reducer”. Not much detail I got from it nor we listened to the system with and without the reducer but later I found out that it’s his implementation of a Schumann resonator.

From Wikipedia’s page on Schumann resonance,

“This global electromagnetic resonance phenomenon is named after physicist Winfried Otto Schumann who predicted it mathematically in 1952. Schumann resonances occur because the space between the surface of the Earth and the conductive ionosphere acts as a closed waveguide. The limited dimensions of the Earth cause this waveguide to act as a resonant cavity for electromagnetic waves in the ELF band. The cavity is naturally excited by electric currents in lightning. Schumann resonances are the principal background in the electromagnetic spectrum between 3 and 69 Hz, and appear as distinct peaks at extremely low frequencies (ELF) around 7.83, 14.3, 20.8, 27.3 and 33.8 Hz.”

Apparently our human bodies are “tuned” to this frequency. We have been living thousands of years tuned to this frequency but nowadays with the advancement in technology, we are constantly bombarded with EMI/RFI from switching power supplies, cell phone reception, wifi etc, it’s no wonder our bodies have problem getting itself tuned to this frequency, masked by all this “noise”. According to some beliefs, this explains the woes of the urban folk, you know, insomnia, irritability, stress etc. Don’t you feel better when you are out in the countryside? Away from all these urban “noise”? So if you have a Schumann generator, this helps you get in tune with this frequency. Anyway, this is the belief.

So it’s nothing new. A natural phenomenon discovered in the 50s. What’s interesting is if you google it, you can buy such a generator various places online. Some tout the health benefits while some champion the improvement in sonics in your hifi system.

Hey hey hey! Improve your health and your sound? This I got to try!

Furthermore 6moons reviewed its effects on audio and health as well. Do a google and you’ll see a lot more of such generator.

Okay, at the heart of it, it’s just a 7.83Hz generator but it has to be transmitted and it seems that the best way to do this is via a coil of bifilar winding. You can read through this thread about a DIY Schumann Resonator, err avoid those posts where folks bicker over nothing.

I like the way the Acoustic Revive unit, reviewed by 6moons, does the coil. They do it the easiest way  — via the PCB! 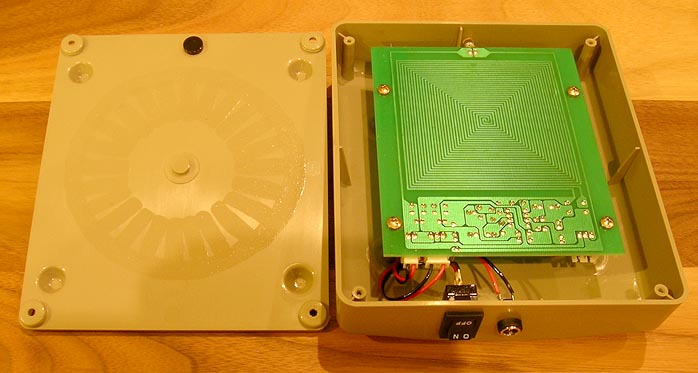 Okay! The rest is easy then, you need to generate a 7.83Hz wave. I don’t know whether sine wave is better or square wave so let’s start off with the simplest 555 timer and get the square wave output.

About the circuit above, you need a 5V regulator, the lowly 7805 will do. The 1kohm, 91kohm and 1uF sets the frequency. Best is to use a 100kohm pot and a 1.2-2uF cap so that you could adjust the trim pot easily to get the desired frequency. 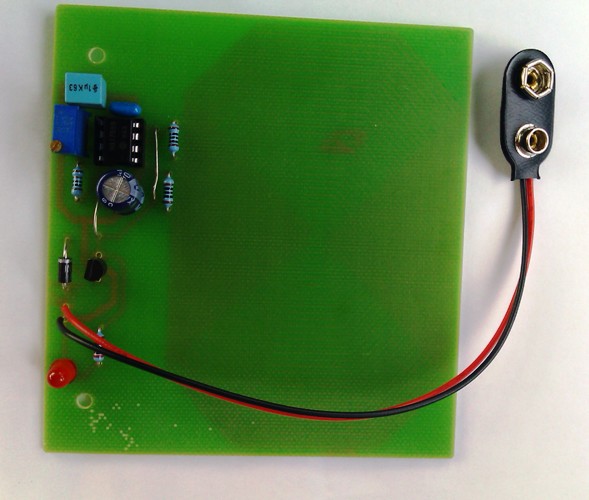 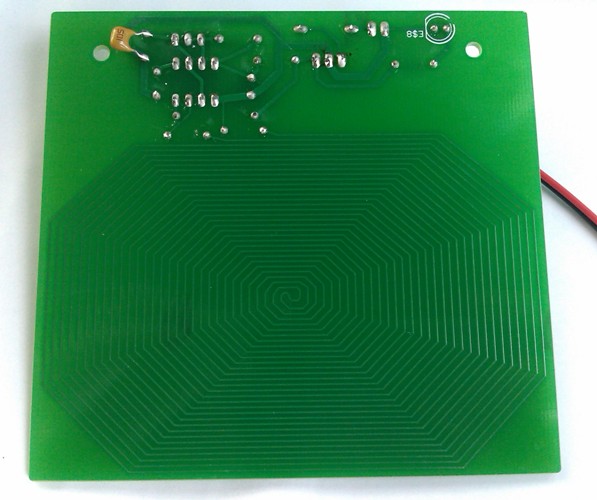 The PCB that I drew, as shown here, the coil has a DC resistance of 10 ohms so I put in a 200 ohm resistor (you may want to try other values here) to limit the current. In the schematic above, it’s represented by the L1 coil. As I can’t measure the inductance, the 1uH above is only for simulation purpose. Feel free to draw the above on Linear Tech’s excellent Switchercad to simulate and fine tune the circuit if you desire so.

Now, if you are a true blue diyer, you should have all the above parts, less the coil and probably the 555 timer. Don’t fret over part quality here. You don’t need a Black Gates nor a teflon cap nor an Alps pot. Just go to your parts bin and recycle! Take out that horrible electrolytic cap which you swapped for a Black Gates in your CD player. Use that resistor which you took out from your amplifier when you upgraded to a better part. Recycle!

As for the coil, feel free to wind one yourself. It can’t be that bad. Since I intend to build the PCB for the generator, it just makes sense to draw the coil on the PCB as well, ala Acoustic Revive.

Oh yeah, after powering up, you don’t need a scope to check the frequency. As the frequency is only 7.83Hz, a decent multimeter is able to measure this. If your multimeter can’t, then it ain’t decent.

So there you go! Now you have all the info to build your own. I mount it in an ABS box (black please) and power it via a 9V rechargeable D-type battery. Why battery powered and not via a wall wart supply? So that you could experiment with placement, dumbo. Now you are ready to test out your Black Box.

First, we placed it in our bedroom. I think the signal was too strong as both my wife and I didn’t have a good night’s sleep. Our dog, tonto, seems to sleep fine though.

The second night, I lowered the signal (by decreasing the resistor to 200 ohm shown in the schematic above). My wife slept much better and she told me she woke up feeling much much better compared to other days. I didn’t sleep well though. tonto still slept fine.

The third night, we placed the unit further from us. Again my wife slept very well while I slept ok. tonto slept fine.

As we continued this little “experiment”, it seems that this Schumann generator works better on my wife than me. We also learned that tonto will probably sleep through an earthquake.

Invited some friends over and we listened to our system and played around with the Schumann resonator. Wow! At certain placement, as one friend put it, “it’s easier to be drawn into the music”. Placement definitely affects the effect. So this definitely works in an audio system!

Passed one unit to Gabriel for him to try and he says he has never rested better than before! Gabriel, due to his labour breaking to build you guys those excellent speakers we have here, often have sore neck and back aches. But with the Schumann generator, not only he sleeps better, he wakes up feeling more energized and feels more energetic throughout the day!

Okay, in summary. This thing works. It’s no snake oil. When I told my friends about this, some gave me the dirty look which says “are you nuts?”, then proceeded to ask me, “Are you nuts?” A more understanding friend is surprised too, “I thought you are too grounded in science to consider all this?”. Well I guess Mr Schumann makes it easier for me to accept this. If without the background of his theory, I definitely wouldn’t believe how would a 7.83Hz affect us.

So, again, Thank You Mr Schumann!