You don’t need to build many amps to learn…

Variations of the Same Theme

I’m forever plagued by indigestion problems. Irritable Bowel Syndrome. Yeah, it’s a fancy name that doesn’t do any good to me. Nevertheless, despite the frequent trips to the loo, and the discomfort experienced, there’s always a good thing to it. Inspiration has always struck during this time of solitude where you have no one else but YOU, where all you have is just 4 walls. I mean, how often do you have the chance to sit down quietly and THINK? How often can your inner voice be heard? It is precisely this sort of solitude “moment with oneself”, that our inner voice can be heard. And thus inspiration struck.

Alright, alright. I exaggerate. But these are variations of the same theme – the Simple EL84.

When I first built the Simple EL84, and optimized the circuitry, I was using GE 8BQ5. After all this is done, I switched to Russian equilvalent – 6Pi14-EB. This is supposedly E84L and is supposedly more rugged. Well, the construction looks so to me! A few weeks later, switched to matched quad JJ EL84. Along the way, I maintained the same driver throughout – JJ’s ECC99. [Err… If you are considering/building the Simple EL84, you may want to back off the secondary of your power trans from 240-0-240V to 230-0-230V (or even 220V) as I noticed some times our incoming VAC can easily go above 240V. When this happens, we could have a B+ of 320V. The EL84 DOESN’T like that. I’m sure you won’t like 320VDC on you either.]

I’m hard pressed to describe down to the minutiae the sonic differences between the different versions of EL84. All sound very good! The only thing that stuck in my mind was that the Rusky version is more dark sounding and the JJ’s take a long time to run in. Does the GE sound better? I can’t remember! Never mind, all in all, I love the EL84! (And I still have RCA, Sylvania and Amperex 8BQ5s to play with…)

OK, what else can you do to up the ante? To raise the sonic bar? We could play around with caps, resistors blah blah blah but it’s going to be an expensive and most probably, not very rewarding process. I mean, let’s go for the max bang for the buck! Let’s go for the jugular! And not tiny, minute incremental progress. And this calls for… circuit changes.

First off, by just changing some wirings, we could reconfigure the output from ultra linear operation to triode mode. This is very easy. I would suggest you wire the ultra linear tap from your output trans to pin 8. Pin 8 is internally unconnected inside the EL84 so we could just “borrow” this pin. Then wire a 100 ohm (47 ohm is just as fine) pin 9 (grid2). This is where it gets interesting.

If you wire the other end of the resistor to pin 8 (thereby connecting the ultra linear tap), you get ultra-linear operation.

If you wire the other end to pin 7 (plate), you get triode operation.

Yup! It’s this easy! But with triode mode, you lose half the power. If you can get by with 5 sweet luving watts, you should go triode! I know it’s only 3dB but if your speakers need all the power it needs, 3dB is a lot… Try and see whether you speaker can work well with ~5W.

If you don’t want to lose power, we could play around with the driving circuitry. We could change the driver tube.

The main reason I built my Simple EL84 with 2 driver tubes is so that I could experiment with different drivers. The ECC99 has proven itself to be an excellent driver. Highly recommended. Other choices are 5687, 5842… But let’s do something totally different.

Let’s use EL84 to drive EL84s. Yes, folks. Let’s pay a visit to cool audio artisan from the Land of the Rising Sun – Sakuma San.

Now, Sakuma San is a cool dude. His amp philosophy is very simple. Like drive like. If you like the sound of a 300B, then use 300B to drive it! Why stick a 12AX7 in front and ruin the 300B sound? Sound philosophy eh? Also, Sakuma San is a strong advocate of transformer coupling. Now, this tightwad here (yours truly) has experimented with the Sakuma philosophy before, via the “Not Quite Sakuma Darling”. “Not quite Sakuma” as I used caps instead of transformer coupling. Well, the sonics is something totally different from what I have listened to so far. I hear a very transparent tone. Very very transparent. In addition, a wide wide soundstage! This was quite a revelation to me. Unfortunately, I found the lack of bass lacking and went back to more conventional (read: boring) circuits. You can definitely tell a green horn there.

OK. I will like to think I’m wiser today. (yeah right). So I took out the ECC99 from my Simple EL84. Rewired it for EL84. Since I wanted a quick listen, I didn’t optimize the circuitry and used the existing 18kohm plate resistor, 390ohm cathode resistor etc. Oh yeah, wired in a 100ohm resistor between plate and grid2 for triode connection. It’s a coincidence that triode-configured EL84 has roughly same specs as ECC99, namely mu of 20 and plate resistance of ~2kohm.

This is Sakuma San’s implementation (in 1982!), with phono-stage. For Sakuma San’s complete work, refer here.

As you can see, Sakuma San uses a 30H choke on the EL84 plate and runs it at 27mA! This is hot! This is almost the same power as my Darling amp! This kind of beefy driver can drive almost ANY tube out there. In comparison, I’m only running at a measly 10mA… As it’s pretty obvious from the circuit, the transformer coupling and output stage is pretty different from the Simple EL84.

Okay, enough talk, but how does it sound with the 10mA EL84 driver? Well, not that different from an ECC99. Namely open sounding, very clear and very transparent. But. But. But. It’s more natural as well, and has better imaging. As Good Ears was at my place, he commented that the EL84-EL84 “portrayed the singer’s mouth better”. I love this amp!

While Sakuma-inspired gained naturalness in the sound, triode configured output gain realism. I was quite shocked to hear what triode mode sounds like. Imaging and focus is bettered as well. With EL84 as driver and output EL84 configured for triode mode, MAMA MIA! This is a FANTASTIC combination that has knocked me off my audio socks!

Well? What else have I tried? I changed the plate load to 10kohm for a `hotter’ drive at ~15mA. Look at the blue line below. The curves look more evenly spaced. But I don’t like the sound. It has more guts, more balls but at the expense of naturalness. No, no. Can’t do. (I also tried to grow a beard ala Sakuma San. No. Can’t do either.)

The red line and dot shows what I’m doing right now. The blue one looks more linear at 15mA and is gutsier. Maybe you’ll like it. I don’t.

Later, I wired in a 30H choke for plate load. Now this baby runs hot! With B+ of 310V, the EL84 plate is now at 290V. Cathode sits at ~11V, very similar to Sakuma San’s version, with 28mA running through! I lost some naturalness again but images seem to be better fleshed out. Vocals are thicker and you lose some details along the way…

What else can you try? Surely there’s more right? You could try to regulate the screen grid. Hold it at a constant voltage instead of swinging with the music. RC from the B+ will do. Or gas regulators like 0D3 (for 150V). I’ll try this o-n-e d-a-y……

OK. What’s the point of doing all this? Just to illustrate to you there’s no “perfect amp”. Every circuit you try, no matter how reputedly good sounding it is, it’s still subjective to different pairs of ears. Everyone listens differently, every amp is built differently. Plus choice of components, circuit layout, interfacing with CDP/speakers etc. You can now see that “designing an ultimate amp on paper” is just talk. Build it up first and then tweak to suit your taste. I know it takes more work but once you are done, you know this is YOUR ultimate amp, rather than some sad case’s.

After all this fun, I settled on the 18k plate load EL84 drive EL84 as it’s the most natural sounding of the variations above. Some of the combinations are more fun, more hi-fi and impresses the audiophile in you but since I play my system almost 10 hours a day, naturalness is what I want. Your mileage, of course, should vary! 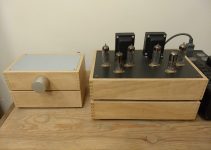