For serious listening, my partner Denise and I power our primary system from an inverter fed by a Trojan J185G 12 volt battery, so the obvious 12 volt source for our Monica 2 was the same battery.

Fitted with a 2200mF cap and fed by the Trojan, our Monica sounds beguiling (see my Love Letter of 20.04.2007). There’s a drop in sound quality when Monica is on the battery and the rest of the system is on the mains, but that’s not Monica’s fault: blame relatively crappy mains power (which, of course, is why we prefer the inverter).

Monica 2 on our battery sounds great and, given our set-up, a battery is the most convenient power source and costs us nothing extra, so we’d never considered an alternative. Until recently.

A few weeks ago I read Clive Walker’s Love Letter [15.1.2007]. Clive had tried a battery with his Monica 2, but had decided that his own PSU sounded better (for details see his L.L).

I knew Clive’s experience wasn’t unique; other reviewers have praised battery power for some of its qualities but have also had some reservations. The main short-comings of a battery, compared with a PSU (I’m referring here to any active PS), seem to be diminished bass and treble extension and (as a consequence?) some loss of body and slam and of ‘PRAT’. Clive added another: some loss of low-level detail. I haven’t seen this reported by anyone else and it might be the result of Clive’s choice of battery; more on that later.

Despite its reported shortcomings, it seems to be almost universally agreed that battery power – for Monica 2 and for at least most other NOS dacs – offers blacker silences between notes and more transparency and ‘air’. When you’ve heard these qualities it’s hard to give them up: in fact they’re the qualities that make our ‘inverter power’ superior to our mains.

So, should we use a PSU or continue to use a battery? Is the choice inevitably a trade-off? These were the questions that prompted Denise and me to do a comparison. Before I talk about what we found though, I want to mention the results of an earlier test.

Big Battery vs Bigger Battery
A few months ago Denise and I had experimented with a standard car battery (90 RC, 460 CCA) in place of the 140 AH Trojan (both fully charged). For powering a Monica 2 most people would call the car battery big; we certainly thought it would be big enough to match the Trojan, and in fact our main interest was in the difference that might come from having a power supply for Monica that was separate from the –battery – power supply that fed the rest of the system.

We’d expected that a separate, though smaller, battery for Monica would at least hold its own against a larger battery that she had to share with an inverter, but we were wrong. The bigger battery produced indistinguishable results in each configuration and in each case it outperformed the smaller one. It wasn’t a case of night versus day but the differences were quite obvious. Compared with the Trojan the car battery offered about the same (certainly not more) bass and treble extension and the same ‘battery qualities’ of black silences, transparency and air; however there was slightly less low-level detail and the presentation definitely lacked the body and slam produced by the bigger battery – qualities often associated with a good LP.

Big Battery vs PSU
Our battery for this comparison was the one I’ve mentioned: a Trojan J185G, conservatively rated at 140AH for 5 hours. Our PSU was the unit whose regular job is to charge the Trojan. It’s a laboratory PSU from ‘Powertech’, a Jaycar house brand (although I’ve seen the identical unit in other electronics shops, just with THEIR badge on it): reasonably large and heavy; variable 3-15V; analogue volt and amp meters; ripple and noise < 10mV (RMS). It was fairly easy to re-jig this so that it was fed from the inverter and could thus be used as an active power source for Monica.

We agreed to feed the PSU to Monica with her 2200mF reservoir cap still in the circuit. I wasn’t keen to cut the cap out of the circuit for the sake of a short-term trial and in any case Denise and I didn’t think it would affect the PSU’s performance. Others might disagree however, or, regardless, might want to experiment.

We warmed the system thoroughly, on mains power; switched to the inverter; played a disc for about another 20 minutes; then began the audition. It’s hard to hide the switch-over from one source to another so at all times both Denise and I knew which source was which.

Our Conclusions
In most respects our conclusions were very similar. The PSU sounds nice, perhaps you could say ‘slightly warm’, but compared with the battery it’s muddy, and yet, in Denise’s opinion, actually produces a ‘thinner’ sound. What I think she’s getting at is that it actually has less body and slam than the battery, but with the muddiness masquerading as ‘body’.

I didn’t notice the thinness that Denise reported. What I did notice was what a lot of commentators have already remarked on: the battery produced dramatically blacker spaces between the musical notes. The result is significantly more transparency and air, a spaciousness and lightness that the PSU just couldn’t match. Along with that, though, the battery produced at least as much treble and bass extension, a larger sound stage and more detail, and more slam and emotional involvement. In these areas Denise’s conclusions were the same as mine. Putting it all together, there was no parameter on which the PSU was superior.

Having Your Cake and Eating it too
Our experiments suggest that you CAN have the best of both worlds: i.e. the virtues of both a PSU and a battery. However, you can’t get them all unless you use a fairly big battery. Even a standard car battery isn’t really enough, although it does seem to deliver most of the goodies of its larger cousins. I’m reasonably sure, now, that as the size of the battery goes down, more and more of the virtues of battery power are lost; if you plan to use nicads, or lithium cells (as Clive did), or even a small SLA, you’ll definitely be in the compromise zone, where the merits and demerits of the two power sources will need to be carefully weighed up.

Passing the Baton (Passing the Buck?)
Our experiments comprise not much more than a couple of case-studies, so it would be premature to assume that our results are universally valid. I’d like to see the results of more experiments, using different amplification, different sized reservoir caps (and perhaps different brands), various types and qualities of PSU, perhaps a battery even larger than the one we use. On this last point: Denise and I are considering a 500AH 12 V battery bank. If we go ahead with that we’ll definitely want to see whether even 140AH is too small a battery to get the most out of Monica 2. 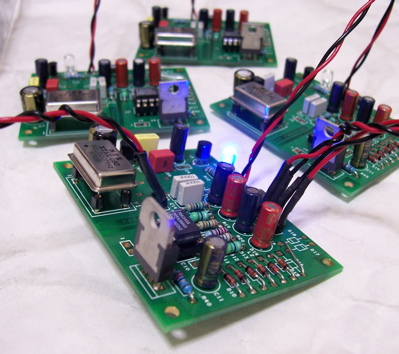