A Tale of 2 Trans 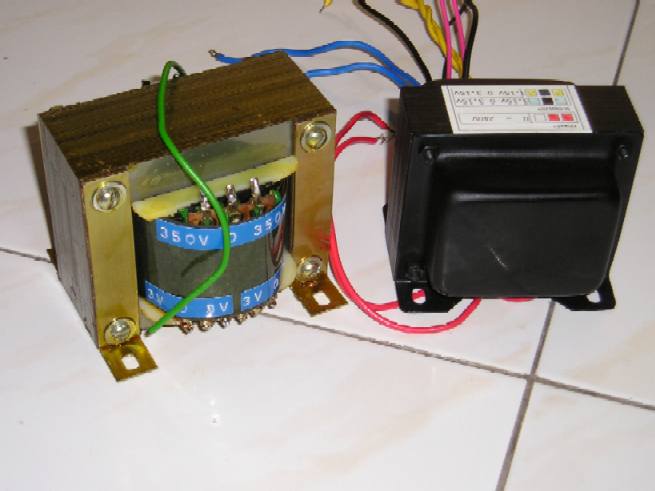 Guess what? I made a tube preamp recently. Wow! Fabulous sound! I love it! But as it was running in, playing music in all its glory, suddenly, I smelled a weird smell. Instinct told me to look at the preamp and holey moley! It was smoking! Immediately I reached for the power switch. It was still playing music then but the volume was getting lower. And the trans was really really really hot. I couldn’t even touch it, 10 minutes later.

Damn. Could it be my new circuit? Could it be something in my preamp? After taking out the power trans, I checked and checked but couldn’t find anything wrong with my preamp circuit. I remember the voltages were all okay earlier. Anyway, I have a spare power trans, so in this guy went, out went the other. Played music and all’s well again. Couldn’t be my preamp as if it were the preamp’s fault, it would cause a fault immediately, I reckoned. As music was playing, the power trans was only lukewarm, like before. So everything’s okay. So I thought.

The preamp was slowly breaking in, the sonics taming down and gaining beauty and elegance along the way. Wow. But then all of a sudden… that dreadful smell again! This trans though, lasted few days longer than the previous one. No, still not good enough. At this point in time, I had to ask myself, should I go back to this winder? But how can anyone guarantee this won’t happen again? Or try someone else? Or FINALLY, once and for all, learn to DIY my own?

As usual, when faced with utmost danger, your super diy hero will have to consult his “guru”s. And one of this guru (who should remain unnamed) explained this problem, in a way only the experienced can do. You see, unless your trans is a split bobbin, the primary winding is most probably the innermost layer, and the various secondaries will be on top of this layer, thus forming the outer layer. After winding, the trans is supposed to be soaked in lacquer so that when it dries and harden, it will “coat” the windings and ensure zero (or at least minimal) movement of the windings. Now the problem is that some trans winder, after winding the trans, they don’t soak the trans long enough. As a result, the lacquer doesn’t get to seep into the primary windings. Now this seems okay but after some usage, due to the primary coil “vibrating” at mains frequency, sooner or later, the insulation of the magnet wires will start to wear out, you know, rubbing against each other. Now when this insulation is completely kaput, you have a short! Now this is what my simple mind understand. But how do I know this is the cause of my recent trans disasters? Easy. This is the third time it has happened. When it happened the second time, immediately I measured the resistance of the primary windings and compared this to a good trans (of the same ratings, windings, by the same winder. what are you thinking?). And, the resistance of the bad trans is about 20 ohms lower.

Coincidentally a customer friend was relating his power trans experience and recommended his trans winder. Okay, between do-it-myself and this, this I have to try!

So I met up with these folks. And what a joy! For once, I’m talking with folks who know MORE about transformer engineering than me! I mean, I know almost nuts about transformers, so you can imagine my pleasure. : ) After some discusion, the resultant trans is as above. It’s butt naked but it’s bigger than my previous one, though they are both of the same “VA rating”. And it has electro-static shield between the primary and secondary. And it has ACCURATE voltages. I under-specified the heater to 3-0-3V instead of 3.15-0-3.15V as I anticipated the voltage will be higher at lower loading. I was wrong. It was very accurate within 5% at both low and high loading! I’m glad to be wrong!

But when I wired this trans in my preamp circuit, there was hum. Music was excellent as before but where did this dreadful hum come from? I searched and searched… then it occured to me that this hum is independent of volume control. Since I changed only the trans, I checked the trans grounding. You know, the body of your power trans should be “earthed” through your chassis right? But not this trans. The nuts and bolts are there but the electrical connection isn’t. Huh? It’s the lacquer stupid! This trans is sooooo coated with lacquer that I had to scrape off some of this lacquer, thus an earthed connection through the nuts and bolts is possible. From not enough to too much lacquer! Of course, once this connection is there, hum dissappeared. Silence is indeed golden.

At the moment, I’m a happy man. My preamp is running happily, the voltages are there, stable. The trans winder even gave me a 6-month warranty. But the best test is still the passage of time. I’ll report more in future.