I mean improve, the performance of your system.

If you have been to our forum lately, you’ll notice that what started as a thread whereby martinbls laments the “slow sound” he got from Monica, slowly evolved into a thread where with fellow members contributing, we now have another winner tweak for Monica! And all of the ss i/v stage users!

Okay, martinbls asked the question. Member assendor (hats off the most diligent member on the forum now! Thanks a lot Jonas!) then gave him some suggestions, of which the most potent was his mentioning of Nelson Pass’s First Watt B1 Buffer Preamp. The basic idea is to convert Monica’s highish output impedance to a nice low impedance. 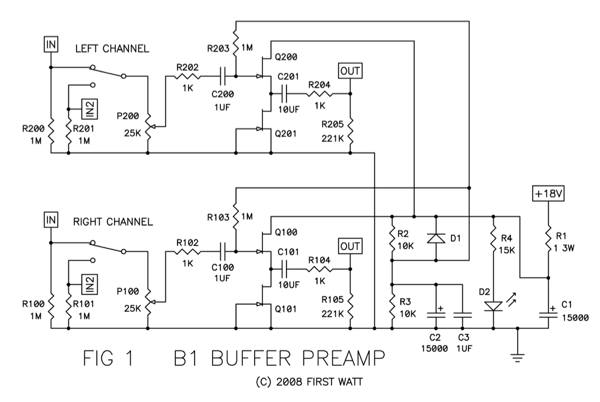 Then member PaulN, (sharp as he always is!) saw the potential right away and suggested incorporating the JFET stage Q100, Q101 (and likewise Q200, Q201)
directly at Rudolf Broertjes’ SS I/V Gain Stage, just before the output capacitors.

All other components are not needed as we already have 1/2 Vcc from the SS I/V stage.

It’s one thing to suggest, but another to build it right away and report to the forum! Within couple of hours, I was kinda shocked to receive an email from PaulN saying he has built in the tweaks and reported the positive results!

Boy oh boy! Now that is something!

So today, even though I’m supposed to be working… I thought I could sneak in half an hour for this tweak. Well, that eventually became couple hours of listening!

Okay Mr Nelson Pass recommends 2SK170 low noise audio transistors. I don’t have this and it’ll be quite a pain to acquire them since my local (as in within 10 miles) supplier does not have it either. 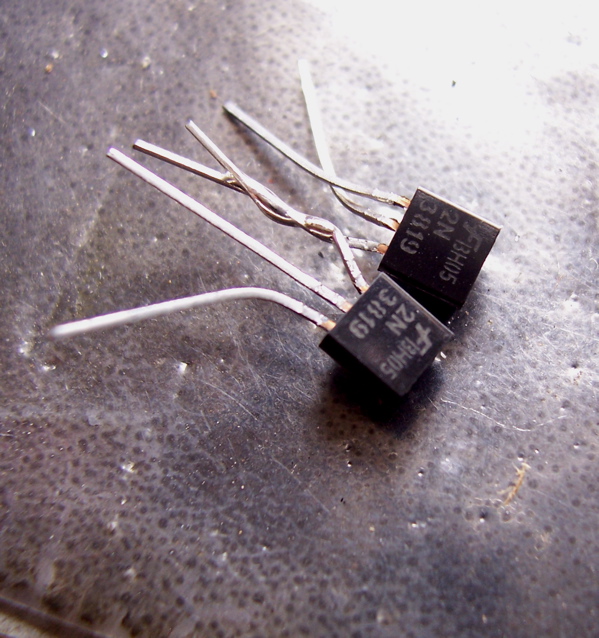 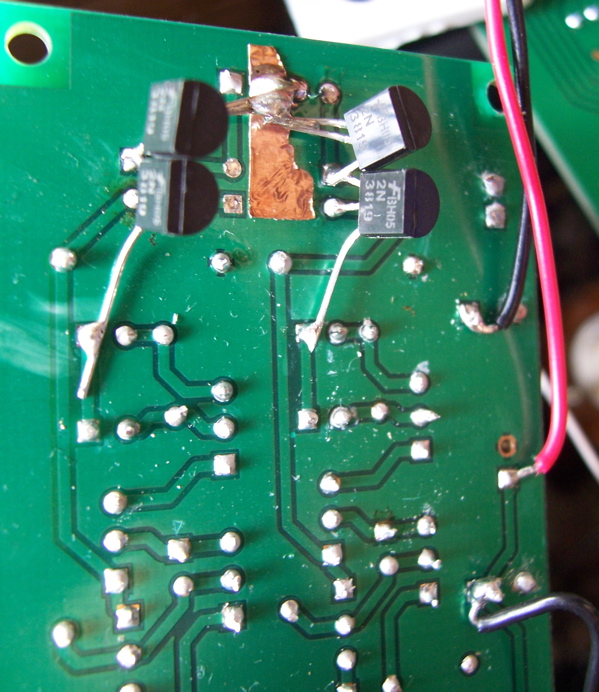 [If you wonder why my non-macro-lensed point-and-shoot can shoot such close-ups, go visit my PracticalPhoto site. Sorry, can’t help myself to some self-promotion here.]

So I incorporated the 2 FETs per channel into Monica3. Some soldering acrobatics is required here. Hey, I know YOU are one solder gymnast! Send me pics of your best work!

Now I didn’t put in any resistors before or after the FETs. I’m always of the (stubborn) opinion that if it’s not needed, then we don’t put them in. Yes, I’m aware these are RF transistors. Yes, I’m aware non-oversampling DAC has the 44.1kHz component riding… Yes, I’m aware I’m stubborn. You enjoying yourself there?

Now the sound? PaulN’s excitement is justified! I have been communicating with him quite regularly the past few months and I really trust his ears. He makes me feel like I have tin ears due to his excellent hearing ability. Hey, wait a minute, most folks make me feel the same way. Perhaps I need to check my hearing…

I’m digressing. But PaulN is right! The power of a good tweak is everything is better! Better definition, better detail retrieval, better bass, even transients improved! … Damn it, why didn’t I think of this earlier?

As such, I take my hats off (both literally and non-literally to PaulN, Mr Nelson Pass, assendor and martinbls. You guys have just completed Monica!

You see, all this while I have been pensive about this as I never like her highish output impedance. I thought a good solution would be to couple with our tube preamp which through its output transformers would solve this impedance “thingie”. Well, now even with the tube preamp, the improvement is still amazing!

Okay, I can see you nit-picking there! Nah, I don’t think I’ll bother with 2SK170. You see, the signal voltage we are dealing here is about 1Vrms. The 2N3819’s noise figure isn’t anywhere close. Well, perhaps one day I’ll try 2SK170 but for now, I’m just happy to listen!

Okay, here’s another tweak which only YOU can work it out.

You know, for the recent audio show, actually we have Monica3, Charlize2 etc built up for the show. However, just a week before the show, wanted to try something different (like we have so much time in the world just before the show…)

I like the idea of a DAC-preamp, so wanted to integrated Monica3, our new volume control and the tube preamp all into one chassis. Hence we have this girl… 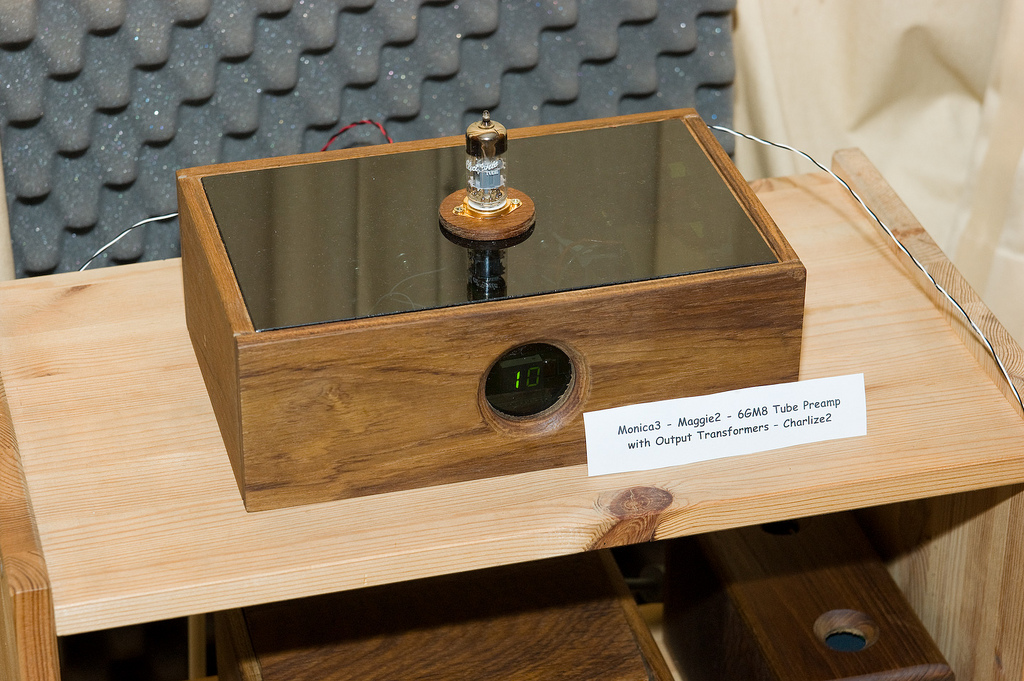 When music played… we got a shock. This girl sounds so much better! And much quieter too! Soundstage is wider and noise floor is lower.

Since the electronics and the external power supply is all the same, the only possibility for such an improvement is the fact that we have greatly reduced the number of interconnect links between component.

Why heck, our interconnect cable is no slouch. It’s the same wire we use in the internal wiring. And it’s shielded as well.

Why heck, we liked it so much, we later incorporated Charlize2 into the whole mix! So look ma, no interconnects! 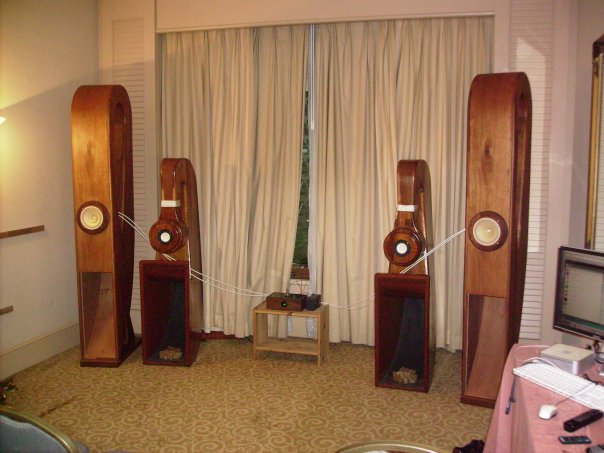